Adult attention deficit hyperactivity disorder (ADHD) is a condition that occurs with some frequency in the adult population. It was generally thought that the condition begins in childhood and when left untreated or unrecognized the symptoms will continue to manifest themselves well into adulthood. Recent research suggests adult ADHD may be a condition distinct from childhood-onset ADHD [see: Late-Onset ADHD May Emerge in Young Adults].

An adult with ADHD may exhibit restlessness, inattention to detail, difficulty in focusing and completing tasks and impatience. These behaviors often lead to relationship problems and difficulties on the job. ADHD has been shown to have a strong genetic component. In adults the primary treatment is medication often in combination with therapy.

The following stimulants are frequently prescribed for ADHD:

In addition, although not a stimulant, Modafinil has proven to be useful in the treatment of ADHD.

The treatment plan for adult attention deficit hyperactivity disorder will often include behavioral or cognitive therapy as an adjunct to prescribed medications.

It is not uncommon for adults with ADHD to exhibit other issues such as difficulties with depression or anxiety. Collaborating with the psychiatrist, a treatment plan will be designed that covers the entire gamut of the patient's issues.


At times everyone experiences anxiety. Situations occur that cause an individual to be naturally apprehensive however in the case of an Anxiety Disorder an individual experiences excessive and persistent worry, often concerning commonly occurring situations.

For those suffering with an anxiety disorder the fear and terror can be so intense that daily routines and functions are disrupted. In some cases the person may experience a panic or anxiety attack where the individual is gripped with blind fear that is all consuming. The individual becomes unable to focus on any external stimuli.

Anxiety disorders are debilitating and interfere with daily life. It should also be noted that anxiety attacks are not necessarily of short duration but can last for a considerable period of time. As a coping mechanism individuals suffering from an anxiety disorder often attempt to avoid situations that they believe may trigger an attack. Unfortunately, avoiding these situations often impact one's quality of life or prevent one from accomplishing their goals.

Some of the drugs that have proven to be effective in treating anxiety disorders are:

The usual course of treatment is medication, sometimes in conjunction with talk therapy, to minimize or eliminate anxiety disorder symptoms. Often improvement is seen over the course of a few sessions.

Persistent worrying and ruminating about a phobia leads to anxiety provoking distress and angst. Untreated, social phobias can persist for a lifetime but treatment is available that can effectively relieve the symptoms.


Clinical depression is a serious condition that occurs with considerable frequency among adults in the United States. Although at some point everyone may feel "down" or sad, clinical depression is different. It involves prolonged and persistent feelings of sadness, hopelessness, guilt or worthlessness and may manifest itself as bouts of fatigue, restlessness and agitation. Depression is primarily an adult disease although it can occur in children and adolescents. It is not uncommon for depression to occur in concert with other diseases such as heart disease, diabetes and Parkinson's disease.

It is important to recognize that with professional treatment a depressive mood disorder condition can almost always be improved and often can be successfully eliminated, but left untreated, the condition will frequently worsen. In fact, when treatment is started sooner the condition is generally resolved more quickly.

The causes of depression involve genetic, physiological, and environmental factors. When a psychiatrist starts treating a patient with depression he or she will review the patient's medical and family history and inquire about recent significant changes in the patient's life. Researchers have identified areas in the human genome that may trigger clinical depression (note the Gene Therapy section found on this page). There are physical changes that can be seen in the brain of an individual suffering from clinical depression and as one recovers these changes begin to reverse themselves. In cases where depression is not treated structural changes can become permanent.

Other categories of antidepressants channel other pathways in the brain and also be effective in treating depression. It should be noted that some drugs are more effective with some individuals than others so it usually takes some "fine tuning" by the doctor to find the best medicine for each particular individual. All antidepressants have potential side effects and these must be carefully monitored to ensure their use remains manageable. (Improvement of symptoms will usually be noticed within two to four weeks and a full course of treatment may last one year.)


Treatment for clinical depression has been shown to be most effective when medication is combined with therapy. Evidence-based psychotherapy approaches such as cognitive-behavioral therapy (CBT), interpersonal therapy (IPT), and problem-solving therapy (PST) are used effectively for treatment of depression.

Problem-solving therapy (PST) addresses the issue of inadequate coping skills, particularly in social situations, as a cause or trigger for depression. This therapy teaches patients how to handle stress and crises in a manner that will not lead to clinical depression and to resolve problems in a way that helps to alleviate depression.


One drug that has received a lot attention for the treatment of refractory depression (depression that has not responded well to other treatments) is Ketamine. Ketamine had been used as an anesthetic for many years but has recently also been viewed as an antidepressive. A number of studies, using low doses of Ketamine, have shown the drug to be effective in relieving clinical depression. In fact, the positive effects of Ketamine on patients with clinical depression occurs rapidly-within days as opposed to weeks with most antidepressive drugs.

Ketamine can be introduced into the body using a number of methods, the most commonly used routes are via intravenous infusion and through nasal spray (intranasal).

Intravenous infusions provide for the most accurate dosage intake since Ketamine is slowly dripped directly into a vein over a period of time; usually taking around one hour. For many patients however the time associated with getting the infusion along with the cost of the infusion can be the biggest concern.

The drug is normally well tolerated by the patient. The use of Ketamine does require the supervision of a physician, for as in the case of other medications, the patient must be monitored for potential adverse side effects.


An individual suffering from depression will often be encouraged to make life style changes. Increased activity and exercise have been shown to improve the condition of people with depression. Making an effort to engage other people and avoid isolation may also help to improve the depressive condition. And medications being taken for other disorders should be evaluated as possible triggers for clinical depression and, when necessary, alternative medications should be considered.

The diet of an individual may contribute to a depressive mood disorder condition. There appears to be a relationship between irritable bowel syndrome and depression and anxiety. Pathogens in the gut that cause inflammation reduce the conversion of tryptophan to serotonin which is thought to contribute to depression. A study done in the Netherlands found that a 4-week regimen of multispecies probiotics has a positive effect on the volunteer's mood. [Steenbergen L, Sellaro R, van Hemert S, Bosch JA, Colzato LS. A randomized controlled trial to test the effect of multispecies probiotics on cognitive reactivity to sad mood. Brain Behav Immun. 2015 Apr 7. pii: S0889-1591(15)00088-4. doi: 10.1016/j.bbi.2015.04.003.] This study provided additional evidence that there is a link between one's gastrointestinal environment and depression. A healthy well rounded diet may be one key to reducing the incidence of depression and resolving the problem once it occurs.

It has long been known, based upon well established twin studies, that there is an 81 percent heritability factor associated with schizophrenia. 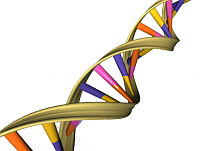 Individuals with many psychiatric disorders often exhibit genetic variations in four specific chromosomal sites. One gene named CACNA1C has been shown to have a direct effect on emotions, cognition, attention and memory retention. The CACNB2 gene has similarly been associated with a group of psychiatric disorders. The importance of these findings extend beyond diagnosis of psychiatric conditions but can now aid in developing a more comprehensive treatment plan.


Modern psychiatrists can utilize current genetic based knowledge and apply it to their patient's care.

When appropriate, Dr. Tanzer will order a psychiatric genetic panel for his patients. The panel returns a series of biomarkers and other information that provide indications of the patient's condition. Equally important, the genetic profile will help Dr. Tanzer ascertain what medications and treatments will be most effective for a particular patient.